The Wife (mother)
The Painter (father)

Brown
The Daughter is the child of The Painter and The Wife. She also has an unknown name. The protagonist can find drawings and markings on the wall with crayon made by the child throughout the main game and the DLC Inheritance. She plays a central role in his downfall and becomes a protagonist in the DLC.

From mementos and flashbacks throughout the main game and Inheritance, the child was, at first, treated well by both her parents. She was given a room filled with toys and had crayons to scrawl art. She played checkers with her father.

However, after the fire which scarred her mother, her situation declined as well. She was pressured by her father who wanted to make her into his artistic heir. He constantly tried to train her in painting (while her mother tried to train her in music). A note can be found in a bureau in the beginning of the game that states that he needs to work on his temper, and everything he does, he does with her best interest in mind. This means the Painter truly believed his daughter could artistically achieve what even he could not. He would critique her childish drawings with a red pen, as if she were a student of his. He regarded her crayon works as "childish nonsense", seeing art not as a hobby or childish pastime for her, but a career and serious passion. Her grades in the arts were excellent, but her other grades fell as her father wanted her to focus on her talents.

She was often caught in the middle when the Painter and his wife started to fight after her accident. Both parents lashed out their daughter during this time, and therefore she was often isolated. She would play with Popiel (the dog) whenever she could. Anytime there would be an outburst from the Painter with his daughter, he would feel guilty and console her by offering to buy her a doll, something that got out of hand to the point where the wife had to write him a note about it.

After the wife committed suicide, the daughter was taken away by social services some time later.

The Painter attempted to steal back his child, but failed in the process, screaming over and over that "she's all I have left." It is unknown what happened to the child in the years after her removal. All we know is she was adopted by a couple, simply called Mr. and Mrs. Kirkstein, in a note from Inheritance where the Painter pleads for them to bring his daughter back.

As an adult, the daughter returns to her childhood home to collect her inheritance and to decide whether or not she should forgive her father. 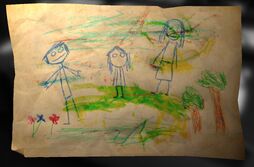 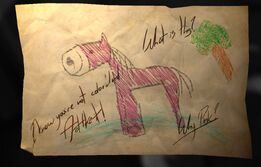 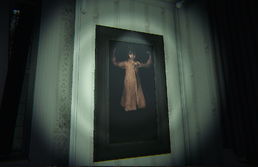 Add a photo to this gallery
Retrieved from "https://layersoffear.fandom.com/wiki/The_Daughter?oldid=1460"
Community content is available under CC-BY-SA unless otherwise noted.