The Painter is the main character of Layers of Fear, controlled by the player. He is married to the Wife and father of the Daughter, both of whom are also never named in the game.

He explores a twisted environment that looks similar to his house, with the important rooms of his home featured at the end of every chapter, containing a piece of the Magnum Opus.

Newspaper clippings and letters have his real name scratched out, presumably by himself.

During the game, he suffers from visual and auditory hallucinations akin to severe schizophrenia, portrayed in diverse and macabre ways.

He was a very well received upcoming artist who fell in love with a talented musician. They married, moved into the house in which the game takes place, and eventually had a child. For a while, they lived happily.

Everything took a turn for the worse however, when his wife was caught in a fire on a department store. She was partially disfigured in the event, and lost the ability to play instruments.
This accident devastated them both, but the Artist became increasingly obsessed in "trying to fix" his wife. Soon enough, he turned into an alcoholic and would lock himself in his studio for days, neglecting both his wife and daughter.

With his sanity rapidly wasting away, he could no longer paint like before. His works were not well received by the critics anymore, and he would take his frustrations out on his family.

Feeling abandoned by her husband and believing he was more in love with his paintings than her, the wife committed suicide, and his daughter was eventually taken by social services.

By the beginning of the game, he wanders the house trying to finish his Magnum Opus.

In the Neutral/Loop Ending, he fails at creating his Magnum Opus. After discarding the painting in a room full of them, he goes back to his studio to begin it all over again.

In the Selfish/Self-portrait Ending, he paints himself. He fails to acknowledge his wrongdoings, believing that all of the suffering he went through was necessary for him to achieve true perfection in his art.

In the Selfless/Wife & Child Ending, he paints his wife and daughter. He finally realizes it has all been for nothing, and that the painting will not bring his family back. Full of regret, he brings his last work to a room full of his wife's portraits and sets fire to them, burning his house and himself in the process.

The Painter's model used in the game. 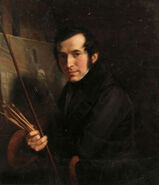 His portrait from Inheritance. 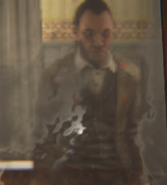 A sequence involving the Painter in Inheritance.

The self-portrait changing. Likely another reference to Dorian Gray.
Add a photo to this gallery
Retrieved from "https://layersoffear.fandom.com/wiki/The_Painter?oldid=1490"
Community content is available under CC-BY-SA unless otherwise noted.